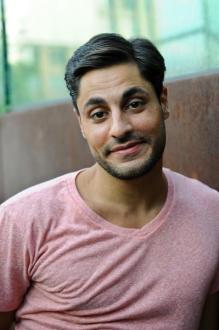 You Can Follow Me @ --
Dan Frigolette seems to be infiltrating the industry in a unique way, by his own hand

A self-starter with a plethora of impressive resume bullets, Frigolette is slowly working his way into our hearts and televisions. Frigolette was recently featured in Time Out NY  garnishing the coveted "Joke of the Week" honors. His appearances across comedy clubs in NYC initially caught the attention of Stonehenge LLC, a multi-billion dollar real estate firm based in New York, whose relationship spawned the comedic webicom The Apartmentship which stars Frigolette who co-wrote and co-produced alongside friend and fellow comedian Andrew Schulz from MTV2's Guy Code.  An avid writer with a Journalism Degree from Syracuse University, Frigolette has used his background to promote many long running shows in Manhattan and outlying boroughs. The creator of the Hoboken Comedy Festival which celebrated its 3rd successful year in 2012 helped to: spread comedy into Sinatra's place of birth, support local charities, and expand the careers of burgeoning comedians; Frigolette loves honoring the town where he currently resides. Originally hailing from Syracuse NY, Dan's stage prose is energetic, full of story telling cues, and an honest depiction of his intricate neuroses. A consummate professional mixing between sharp crowd work and clever joke writing. Frigolette gets around the country doing tours and colleges all throughout the east coast, consistently frequenting Central New York to bring love and laughs to those who watched him become a man.