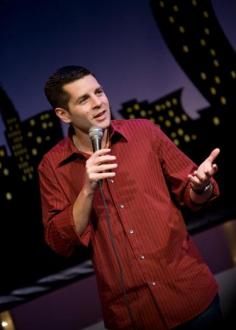 You Can Follow Me @ --
Born in the Great State of New Jersey, Dean’s comedy comes in large part from his unique background of being the son of a Palestinian father and a Sicilian mother

Dean, an award winning comedian who was at one time a practicing attorney, co-starred on Comedy Central’s “The Axis of Evil” Comedy TV special. He is the co-creator of Comedy Central.com’s critically acclaimed Internet series “The Watch List” featuring a cast of all Middle Eastern-American comedians performing stand up and sketch comedy. Dean has appeared twice on ABC’s “The View,” on the nationally syndicated TV series “Comics Unleashed with Byron Allen” and was one of five comedians profiled in the recent one hour TV Special entitled: “Stand Up: Muslim-American Comics Come of Age” which aired in the US on PBS and internationally on BBC World and Al Jazeera. Dean co-directed and co-produced the award winning documentary “The Muslims Are Coming!” featuring a tour of American-Muslim comedians performing free comedy shows across the heartland of America in the hopes of using comedy to foster understanding and dispel misconceptions about Muslims. The film also features special guest interviews with various well known people including: “The Daily Show’s” Jon Stewart and Assif Mandvi, Russell Simmons, Soledad O’Brien and Ali Velshi, MSNBC’s Rachel Maddow, comedians Lewis Black, David Cross, Lizz Winstead and Colin Quinn as well as Congressman Keith Ellison, and many more. The film is now available on Netfilx, iTunes and Amazon. Dean co-created the comedy show “Stand up for Peace” along with Jewish comic Scott Blakeman which they perform at colleges across the country in support of peace in the Middle East and as a way of fostering understanding between Arab, Muslim and Jewish-Americans. He is a also columnist for The Daily Beast and writes frequently for CNN.com as well as other publications.