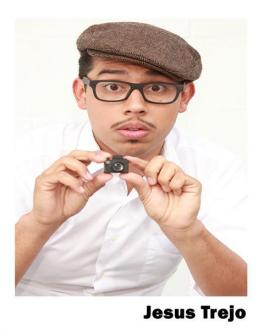 You Can Follow Me @ --
Jesus Trejo Bio A native of Long Beach, CA, Jesus Trejo, has been described as one of funniest young comics to look out for

His high-energy performance is a fusion of characters, storytelling, and physical comedy that paint a picture from within the world he grew up. Jesus’s work ethic has earned him spots opening for the likes of: Steve Trevino, Pauly Shore, Steve Byrne, and Russell Peters. Jesus recently landed a reoccurring role as “Javier” on the new TBS sitcom titled “Sullivan & Son”, Staring Steve Byrne and produced by Vince Vaughn/ Peter Billingsley-- Currently on It's 2nd Season !  Follow Jesus Trejo! Twitter: @JesusTrejo Facebook: facebook.com/JesusTrejoComedy Instagram: @jesustrejo1