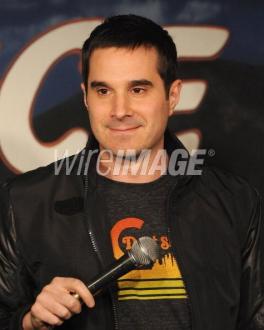 His debut comedy album “Nervous”, recorded at NYC’s The Stand Comedy Club, was highly regarded and lead LAFT Magazine to review John as, “A comedian for the people.” John recently released his second comedy album, “New Phone, Who Is This?” which was recorded at New York Comedy Club. His second album was also well recognized ranking as #1 for New Comedy Releases during its opening weekend. Both albums are currently available on iTunes, Amazon and CD Baby. John can be found Wednesday nights on @Comedy Trend w/ John Campanelli at The Laugh Factory at 10 pm.  The show hosts some of the biggest names in comedy --including Dane Cook, Judd Apatow, Whitney Cummings and Rob Schneider--. The @ComedyTrend has also become a hot spot for the Hollywood elite and has been attended by the likes of Justin Bieber, Zedd, Miley Cyrus, Kendall Jenner all within the past year. In addition, the comedian headlines “Live with John Campanelli” twice a month at The Comedy Store in Hollywood and has made notable appearances on TVGuide Network, Playboy Radio, BiteSizeTV and Reelz Channel. But if you can’t hop on a private jet to Hollywood, have no fear because John plays clubs all over the country, frequenting NYC, and is sure to be found at comedy club near you.