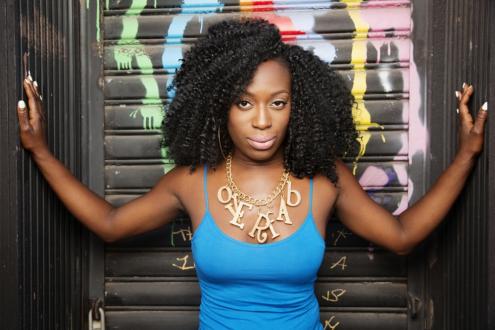 Kerry Coddett [Cah-dit] is a New York- based comedian, actress, and writer. Born and raised in Brooklyn to Caribbean parents, Kerry draws comedic inspiration from her colorful surroundings and offers a uniquely unapologetic perspective that is both irreverent and insightful. A stand up comedian with a modern storytelling style, Kerry is edgy, raw, and energetic, while still finding hilarious ways to skewer the status quo.    Kerry can be seen as the newest cast member on MTV2’s Joking Off, where comedy news site The Interrobang touted her as a comedic force with "a gigantic stage presence who belongs on television." She’ll also appear on Tru TV’s new series Comedy Knockout and has been on Comedy Central’s The Nightly Show with Larry Wilmore and Why? w/ Hannibal Burress, Huffington Post Live, and Essence Live.She has also been a guest co-host on The Young Turks.  Kerry has written viral articles for The Huffington Post and The Atlantic, and has also been featured in numerous publications, includingEntertainment Weekly, Mashable, Elle.com, Buzzfeed, and Salon, among others. Kerry has performed stand up at the New York Comedy Festival, and she’s also the host of Brooklyn, Stand Up!!, a monthly stand up comedy show that has been listed in The Village Voice and the New York Times. She has also written and starred in her own sketch comedy web series, The Coddett Project.  Kerry attended CUNY Baruch College and graduated cum laude with a B.A. in English and Psychology, at the age of 19. Old enough to make decisions without her parents’ permission and young enough to believe that a career in performing arts was possible, Kerry forwent a traditional job utilizing her degree and sought to become a comedic actress. She went on to receive training at the Esper Studio, theStella Adler Studio, and HB Studio. She was able to further refine her comedic chops when she studied at the People’s Improv Theaterand the Upright Citizen’s Brigade (UCB), where she was named a UCB Diversity Scholar, and performed with an all female, all women of color improv team, called Affirmative Action. When Kerry is not on stage telling jokes, she is finding ways to make real life as exciting. This usually involves starting conversations with strangers. In some places, that’s considered illegal. Kerry thinks not having a sense of humor should be illegal, too. Thank goodness Kerry is a comedian. She is not running for president.