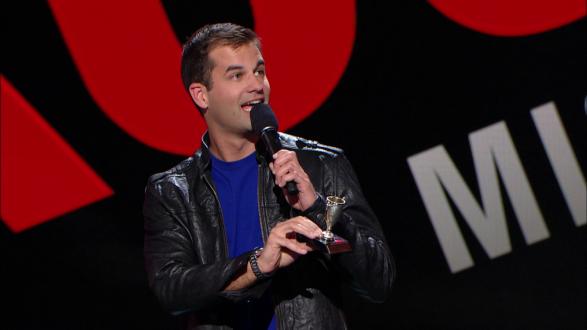 You Can Follow Me @ --
Newest Daily Show correspondent Michael Kosta is a stand-up comedian who was most recently seen on Fox Sports 1’s flagship series, Crowd Goes Wild

Kosta and Regis Philbin lead a panel of sports experts in a lighthearted look at the daily happenings in the world of sports. After 176 live episodes the show got canceled because Regis didn't know shit. Some of Michael's successful segments were “This Week in Punting,” “Stupid Sports Stuff You Can Actually Buy Online,” and “On This Date in Sports History”. Kosta started out as an athlete; he is quick to point out that he was once-ranked number 864 in the world in professional tennis and earned over $11,000 on tour.  Don't laugh, that's $11,000 more than you made as a pro athlete. Kosta gained attention as a comedian when he broke out of the HBO Comedy and Arts Festival in Aspen.  He quickly relocated to Los Angeles where he began his television career; he made regular appearances on The Tonight Show with Jay Leno & Chelsea Lately before both those hosts drowned in their money and ended their shows. He has performed on Conan, @Midnight and also starred in his own comedy special, Comedy Central Presents: Michael Kosta.  As a host, Michael acted as a know-it-all correspondent for E!’s spinoff of The Soup, entitled The Soup Investigates, and was recently seen guest hosting the hit G4 series, Attack of The Show; that stint ended after Kosta caused the show as well as the network to be cancelled (the media says that the network was being reformatted, but we know better). His other TV credits include TruTV’s The Smoking Gun Presents, Showtime’s Live Nude Comedy and Michael also hosted the 63rd Annual Emmy Awards’ Backstage Live show. Kosta has also shot pilots with MTV, NBC, E! and developed a late night talk show with Comedy Central and recently developed his own scripted pilot based on his life, produced by Fox. All of those projects were colossal failures. In the sports world, Kosta hosted Fox Sports Network’s CCHA All Access, a hockey show in Detroit, for which he won two “Michigan Emmys” as performer/host. Those are like regular Emmys, but smaller and a lot less prestigious.  He is also the author of a book titled “101 Tips for Winning More Tennis Matches” which earns him quarterly royalty checks of around $110. Michael lives in Los Angeles where he hopes to someday become famous and forget the little people. You should sleep with him.