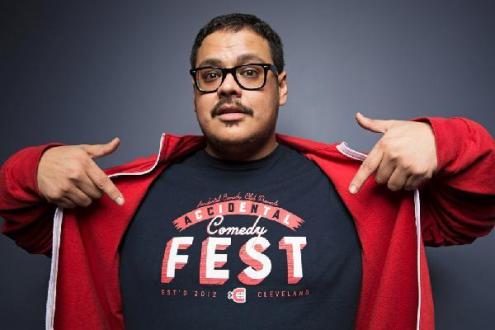 You Can Follow Me @ --
Ramon Rivas is a stand up comedian and eminent latino from Cleveland, OH

In addition to performing, Ramon has been featured on the HBO mini-series, "Man in a Box", YKWD with Robert Kelly & tour video,  PUT YOUR HANDS TOGETHER with Cameron Esposito, The K-Ohle Podcast with Kurt Braunohler, Doug Benson's DOUG LOVES MOVIES and more. In 2014, Ramon's positive vibes and chill comedic momentum earned him a coveted spot as a performer in San Francisco SketchFest (2014) in the inaugural Chicago Comedy Exposition (2014). In 2015, Ramon was invited to take part in the inaugural NBCUniversal & Second City Breakout Comedy Fest and selected by Comedy Central as one of 2015's Comics to Watch for the New York Comedy Festival. As the founder of the Accidental Comedy Fest (Est 2011) and curator of Accidental Comedy Club, Ramon brought indie, DIY comedy shows to a new generation of Cleveland comics thru producing open mics, showcases, and professional shows featuring top, headlining acts at some of the best venues the greater Cleveland area has to offer. His work and the overall growth of the Cleveland scene was featured in the documentary film MAKE FUN (2013). With a fine taste in jokes, juices and dope-ass sandwiches, Ramon is quickly making a name for himself and is an excellent addition to any lineup. In 2016, Ramon was selected by Comedy Central to record a HALF HOUR special (airing fall 2016) and made his television debut on @midnight July 21.