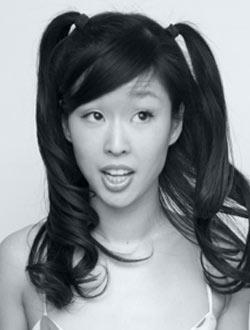 You Can Follow Me @ --
Esther Ku is a comedian, actress and musician but mostly comedian because that’s what she told me to write first

I am her stenographer. (Not really, but she wants you to think she has a stenographer because she doesn’t want you to think she wrote her own bio.) In 2008, Ku was selected as the only female comedian from New York City to advance to the Las Vegas Semi-Finals in NBC’s Last Comic Standing. In Vegas, she advanced to the house portion of the reality show to become a Last Comic Standing Season 6 Finalist where she annoyed the hell out of everybody with her laugh. (I told her not to laugh so loudly but she doesn’t listen to me I’m just her stenographer. I hate it when she treats me this way.) Six months later, she was selected by Howard Stern as a finalist in the Hottest Funniest Chick Contest on Sirius Satellite Radio. She has been a featured regular in the Boston International Comedy Festival and the New York Underground Comedy Festival. She has performed in the hit comedy Shear Madness, the longest-running non-musical play in American theatre history. On her spare time, she manages to dedicate her energy to a serious and troublesome cause — to end tickling forever. “Tickling is forcing someone to laugh when you’re not being funny. Tickling is the opposite of comedy. If you’ve ever tickled anyone, you’re a fraud!” she warns. Ku’s muses include Harold from Harold and the Purple Crayon and Amelia Bedelia from the Amelia Bedelia Collection. (That italicizing will cost you extra little Ms. Ku. This is bullshit.) Esther Ku is the first Ku in her family who didn’t need a green card. She was born in Chicago a couple years after her parents immigrated from South Korea as missionaries thinking they were pioneers in “bringing Jesus to America.” Ku often wondered why her family traveled so far to bring Jesus to a country that already sells him on endcaps in K-Mart. At the age of 3, she picked up the violin. Ten minutes later, she put it down and told her parents it was too Asian. Years later, she became a prodigy at the oboe, the one instrument that best resembles the human voice. After years in the orchestra, though, she grew sick of projecting herself solely through musical instruments and longed for a way to communicate through her voice and ideas. (blah, blah, blah. How many paragraphs of this shit do you expect people to read?) So she ventured towards stand-up comedy with an auspicious debut as the emcee of her 8th grade talent show. Growing up in a rowdy house of five kids with a mother who didn’t allow her daughters to talk to boys inspired Ku. She began to fill her notebooks with jokes instead of math equations. She founded an underground school paper called “the coup” which exposed hypocrisy within the faculty and administration of her high school. At 17 years old, she ran off to college to dodge an arranged marriage set up by evangelical Jesus fanatics. There she learned how to hold a fork correctly and to talk to all the boys she wanted. Ku officially began her stand-up career in Boston where she shared the stage with Doug Stanhope, Steven Wright, Jonathan Katz, and Teddy Bergeron. For a hot second the team Ku and the Jew ruled the club — until they were fired by the bartender. She now resides in Brooklyn and travels the country entertaining audiences with her all-American bratty charm and infamous maniacal laugh. (She told me to write adorable but I secretly changed it to maniacal because it’s a more accurate description of that shrieking noise. Geez when did she get so delusional?) Preconceived notions of Asians and women, and Asian women, specifically, are dispelled within seconds of her gracing the stage. Her delightful demeanor and deadpan observational humor incite hysteria wherever she goes.